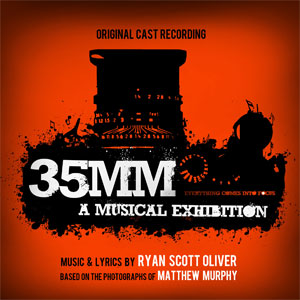 Earlier this week, I got my hands on the new Original Cast Recording of Ryan Scott Oliver's new musical 35mm, which premiered Off-Broadway earlier this year. The cast includes Lindsay Mendez (Godspell), Betsy Wolfe (Encore's Merrily We Roll Along), Jay Armstrong Johnson, Ben Crawford, and Alex Brightman. I had liked all the songs I have heard from this show previously, but this recording, with this extremely talented cast, made me fall in love with this show.

This recording shows off Oliver's composer skills and provides a fun, creative musical, based on photographs, an unusual subject for a musical. While the actors each play many different roles, this gives the show an opportunity to mix voices in many different ways, and they all sound great in every combination.

While the whole album is great, the standouts (for me at least) are "The Seraph," which is hauntingly beautiful, Mendez's rendition of "The Party Goes With You," and probably the most famous song from the musical (and rightfully so) "The Ballad of Sara Berry." I recommend to everyone checking this one out, and I hope this show has a future ahead of it!
Posted by Unknown at 1:16 PM